Our first roadkill. :/ It happened so quickly. I caught a glimpse of it and then it hit the front wheel. The mirror showed a cloud of feathers and Tilen cleared my confusion: “Starling”.

We wanted to get away from the deadly boredom of the highway so we decided to take a trip on the country side. Overflowing with energy and eager to see new interesting things we rolled on. With diverse desert terrain catching our eye we didn’t notice the road getting thinner and thinner. At one point it just ended. That’s where it hit me: we probably should have taken a left on the last crossing.

There wasn’t much traffic and the number of peasants we saw was overwhelmed by groups of red, blue or yellow uniformed kids getting to school. As we were getting close the amusement was obvious.
The unfamiliar sound, a big spot in the distance. To big for a bike,to small for a rickshaw. As we came closer, heads turned in unison, the sight of us converted bones to stone. Two leather wearing pale skins with big shining eyes and bowls on their heads roaming freely on a machine monster that shakes the soul as it roars by. A grotesk sight no doubt. 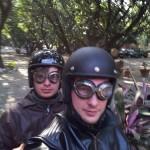 As we passed a bus in which the children were being literally stuffed into through windows one of them turned around. He was curious what’s making all the noise and when he saw us the laughter just burst out. Thank you, I know we look stupid.

And one more random photo of the trip: 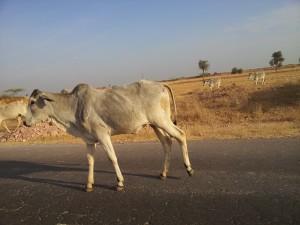 This is what happens when you take a random photo of the 'sidewalk'.