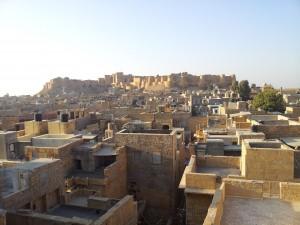 Desert city. Dust, sand and garbage everywhere. Jaisalmer is the last city in the Indian desert to the border with Pakistan. So you can guess it has a busy military camp. But if you’re not intimidated by army trucks, uniformed men with big (but old) guns and planes flying by every once in a while, it could be a nice addition to the festival happenings. 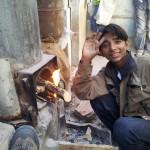 The first thing we did was found a cheap place to stay for the whole gang and arranged a jeep/camel safari. Fort View Hotel had the best value rooms. They were small, but that’s our budget. We got a 5 bed room for 600Rp = 1.8 €/person. The thing that puzzles me is that this room was way better and closer to the fort but still much cheaper than at Residency Center Point, where we didn’t even have hot water fittings – warm water was delivered to your door by bucket on prior notice. 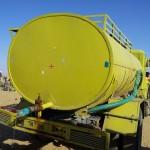 Bottled water on the festival site 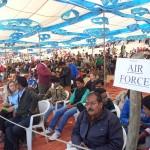 Me in the VIP

We’ve met up with Razi & Majeed again on Camel Ground where the festival was taking place. Some plain camels, a highly decorated horse and a lot of people. Maybe the heat was killing the festive spirit. Our two friends got us in the VIP section where we could enjoy the best view and or course some more of their cookies.

Camel polo, tug of war and water bowl races. The most interesting were the last two, because foreigners could join. We had a great time at tug of war cheering for the two winning foreigner teams. Sadly I can’t say the same for the crowd of Indians sitting around us.
But the organizers got the crowds spirit going with the sight of foreign women clumsily pouring freezing water on themselves during the last race. Of course Indian girls took the first few places and most of the foreigners were disqualified because they couldn’t get the 20-liter bowl of water on their heads.

Camel riding is uncomfortable. Full stop.Camel safari is the thing everyone says you should try when in the desert and tour agents on every corner are there to remind you. We hadn’t tried to ride a camel yet but we knew one thing about it: its uncomfortable. That’s why we wanted a Jeep safari instead. Imagine riding a petrol pumping 4 wheel best over the golden waves of sand. The sun is in it’s eclipse and the freezing night is coming. But you don’t stop, you keep on going, pushing the pedal to the metal, demanding the remaining power of the hooded horses! Why? Because you CAN! Because you are the conqueror, the conquistador, it’s master! You rule the untameable desert and there’s nothing the desert can do about it! 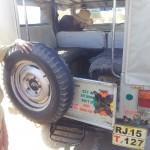 Badass sticker on our jeep 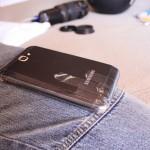 But we didn’t get the jeep. The common Mahindra jeeps are to weak for an adrenaline ride and it’s suppose to be illegal (gathering ‘non typical’ information from the locals is hard work and in the end you just have a lot of assumptions). So we settled on a typical tour with our little twist: only two hours of camel riding. Oh, I almost forgot: before we left Andrew gave me an idea for ‘preservation of electronics’. A fancy phrase for taping your phone. A lot of electronic devices can get busted because of the sand and dust. And believe me: this is the smartest thing I’ve done in a while.

There was so much dust in the wind that when I sat on the ground I got watery eyes immediately. 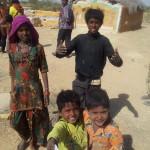 We started off with jeep to some local temple and villages where we found true gypsies – living in temporary houses from wood and mud for about 6 months and then moving to another location, rebuilding their camp there. They are used to noisy tourist dropping in and children know how to use this opportunity best: In a second there’s a crowd of small, sad and dirty faces around you asking for chocolate or 10 Rupees. They looked friendly and didn’t do anything, but I still had ‘watch out for your pockets, hold your phone tight’ repeating in my head like a broken record. Poisonous words of tourist agents. But I guess they’re for your own good,right? 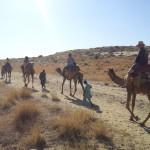 Reaching Sam desert five camels were already sitting by the road, waiting for us. The smallest boy ran right to me ‘Mister, mister! Good camel here!’ He gave me no choice. Tilen got a special one. Right before mounting it the camel went bananas- screaming, standing up and wandering randomly. When they calmed it down and Tilen got to sit on it the owner said: “This is a new camel,so be careful!” -“Isn’t that your job? I can’t do anything from up here. :/ ” said Tilen to himself. 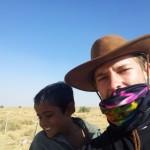 My camel was falling behind because the boy had to run beside it to keep up with the caravan. He was having trouble with the hot sand and his laceless snickers weren’t much help, so i grabbed his hand and pulled him into the saddle behind me. His excitement gave me a feeling he doesn’t get to ride a camel so often. Anyway, he taught me the riding commands and I gave him some cookies. It was fun.

The camel ride lasted only an hour but we were glad it was so. Trust me, this is not close to horse riding. The saddles don’t have leg rests so you’re sitting there with spread legs and with no chance to reposition yourself. 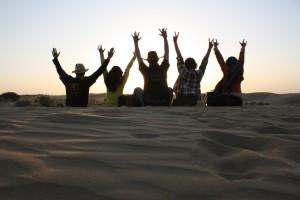 We’ve reached our destination: middle of Sam desert where the Desert festival continued. Camel race was as disappointing as the Camel polo. We waited for it for half an hour and it lasted a whole 10 minutes without any drama or excitement whatsoever.
We decided to get a great spot to take a group photo, so we roamed around, had some fun in the sand and prepared camp for sleeping. The camel ‘drivers’ cooked us one of the most delicious dinners. They were very polite and asked if we wanted more when they saw an empty plate, but couldn’t hide their amazement when I agreed for the fifth refill.

The fire was eating the over dried sticks fast and it was getting f@%# freezing. After dinner only sleeping was allowed. So we tucked into our sleeping bags and dosed off to the intoxicating sound of camel farts. 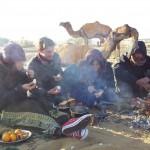 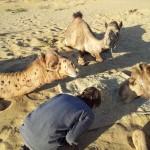 When I opened my eyes i was glad the sun was already heating the sand. A good cup of chai warmed our insides, boiled eggs with toast filled our tummies and we were ready to go back to the city.
Shaiway and yacouen left for Thailand that afternoon so there were only three of us left. Andrew would arrive in Udaipur a day before us so he was responsible for the accommodation. He didn’t have a phone so we wrote the name of the meeting hotel in my notebook and planned group lunch there on the next day. 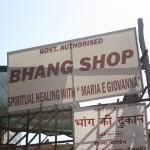 Oh, and one more thing about Jaisalmer that’s totally not connected to our travel experiences: Here you can find Bhang shop – the only government Marijuana shop in India. They sell Special Lassis, mushrooms, cookies and funny cigarettes. Just so you know.

In the morning we prepared for the two day trip to Udaipur. “I feel something strange…” my gut said to me.