So we left Agra on the Republic day of India. I thought some roads will be closed for the parade, but didn’t imagine that we’ll be shufeled around by the police so much. Well, it was partially our fault because we forgot the map at the hotel. It seems we can’t get enough of adventure – if the trip looks like it’s going to be quick and easy, we subconsciously do something to spice it up a little.

We got out of the city on the new highway. BOOOORIIING. No holes, just smooth cruising … until the ‘brrrrrruuum’ suddenly switched to something like ‘fuck fuck fuck fuck fuck’. Breaked, listened, looked, found: the main gasket produced a hole. Wait what? The main gasket broke after the first 700KM?! Hmm, I’m starting to think my naiveness is going to cost me a fortune … Rana clearly didn’t look at the engine as she promised. Just to be safe, we called Chris before moving on: ‘Not a big problem, take it easy and ride on. The repairs will cost you about 500Rp (about 9€)’. 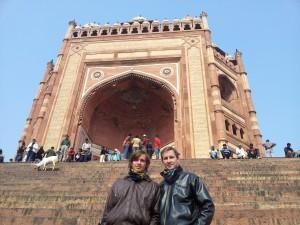 We stopped at the mousoleum of Fatehpur Sikri and was pleasently surprised by a big group of bikers (all on Royal Enfields) that passed us on the road. They gestured us to follow them, but embarrassed by the funky sounds and loss of horsepower we just snailed our way to the nearest parking space.
Fatehpur Sikri was the capital city of the Mughal Empire (built in 1585). Though the court took 15 years to build, it was abandoned after only 14 years because the water supply was unable to sustain the growing population.

On the way to Barathpur something happened on the road involving us, a car and some animals, but I’m not going to post it here, because then we won’t have anything left to tell when we come home again. 😛

I was a bit worried where and how are we going to find a mechanic to fix our bike … we rolled into the driveway at the Falcon Guest House (on our destination – Bharatpur) and saw a brand new Royal Enfield Electra. Problem solved.

There where we were invited to participate in a family feast (they celebrated the engagement of the owners daughter). The experience was unique – a mixture of hospitality and strict protocol … but nevertheless we had FREE, DELICIOUS FOOD!


Posted in Neuvrščeni by Uroš Orešič with no comments yet.